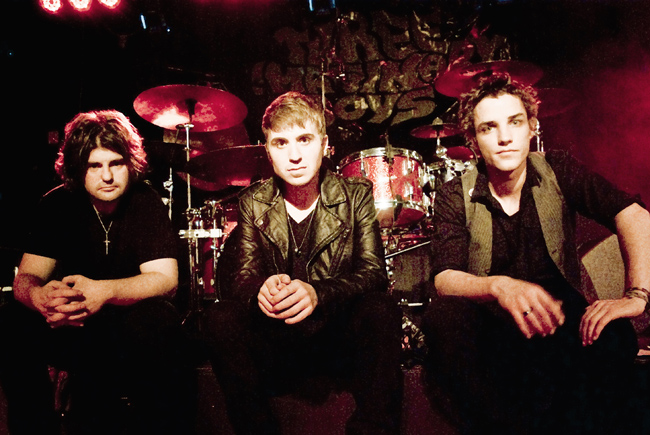 THREE IMAGINARY BOYS is a melodic power-trio that conjures-up high-energy, hook-laden, captivating excitement in their music. Their exceptional song writing ability provides a canvas for them to create and explore every color, tone and theme in their music. The music is sophisticated with classic rock style and contemporary sensibilities.

THREE IMAGINARY BOYS is built on the musical prodigies and imagination of its members. Tim Husty provides thunderous thumpings and articulate timings on the drums and delivers the message of their songs on lead vocals. Tim also plays electric and acoustic guitars, piano, bass, and harmonica, some of which he plays simultaneously, in their live performances! Tim also composes both lyrics and music to the bands original songs. Rob Husty sings while unleashing screaming, blistering lead guitar solos, and also plays rhythm guitar, twelve-string guitar, drums, bass, piano and harmonica. Rob also composes both lyrics and music. Michael Wintermute sings and provides the throbbing, pulsating and powerfully melodic bottom notes of the bass guitar, that anchor the band so that they don't fly off-stage in a whirlwind during live performances! Michael also plays rhythm and lead guitar, piano, keyboards and drums.

THREE IMAGINARY BOYS command a stage presence, which is mesmerizing and full of stage antics that engage the audience in the pure energy and excitement of their shows!

THREE IMAGINARY BOYS has recently released the band's third independent CD entitled "People Wearing Masks". This new album contains thirteen original compositions which explore a complete range of emotions and musical styles, and most effectively demonstrate the musical skills of each member, as well as the compositional achievements of both Rob Husty and Tim Husty, the band's songwriters. The first single released from this album is the title track, "People Wearing Masks" which was appropriately released prior to the album, during the Halloween season.

THREE IMAGINARY BOYS' sophomore album entitled "Going Up?" is a full-length compact disc featuring fourteen songs culled from a repertoire of approximately fifty original compositions. Four singles from this album have been released, which have received air play on numerous college radio stations, as well as several major FM radio stations throughout the United States. Many of the band's other songs have also received airplay on all of these radio stations, as well as streaming on internet radio stations. THREE IMAGINARY BOYS has also performed the band's original material live on college radio shows and other radio programs.

TIM HUSTY has also recently released two solo CD's, which are somewhat different in style from the typical THREE IMAGINARY BOYS repertoire. Tim's most recent release, "A Step Back" is a full-length CD which encapsulates the music and vibe of the 1960's. Tim composed all of the album's words and music, as well as played all the instruments, produced, and co-engineered this adventurous work.

TIM HUSTY'S first solo CD, entitled "Look At The Man" is an eclectic album featuring fifteen songs that Tim, here again, has composed all music and lyrics, produced and played all of the instruments, with the exception of a few special guest performances!

The Official Web Site of the THREE IMAGINARY BOYS